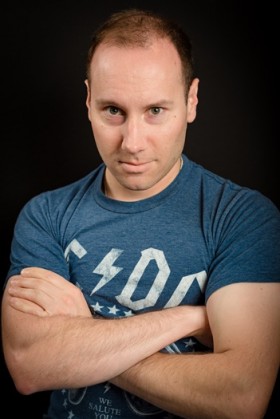 Rick has been in radio for 20 years. He cooks, is a former hockey player and a HUGE NY Rangers fan. Classic Rock is his thing..we call him Rickipedia because he knows so much! He stays in shape by running , skating and working out. He has interviewed dozens of rock stars including members of Aerosmith, Zeppelin, Pink Floyd and the Kinks. Don’t miss his School of Rock feature weekday mornings at 8:10 with Gomez and Lisa.

When you are not in the studio, where can we find you?
That’s easy…on my couch! Actually, I spend a lot of time at home but I do work out there and cook a lot, so I’m not always a lazy a**.

3 words that describe you?
Cranky, smart and impatient. Really makes you want to meet me, huh?

What is the worst sound in the world?
I have a pet cockatiel. When she screams because she’s mad at me for something, it’s the most shrill, obnoxious sound you can imagine. (I try to stay on her good side)

What’s in your fridge right now?
Some milk, maybe cold cuts, and TONS of condiments. It’s funny how I have so little food, but every different topping or sauce known to man.

What famous person would you like to have lunch with?
It would have to be a rock star. Keith Richards would probably be the one.

If you had 5 days to hit the road by yourself, what direction would you head?
West. I’ve been to California once and Arizona once and I’d love to see more of each state.

What was the first car you ever owned?
’64 Olds Cutlass. That thing had an enormous engine and it HAULED. Got a lot of tickets in that thing.

Favorite app on your smartphone?
I use Twitter constantly.

Favorite sport to watch?
Nothing comes close to hockey for me. I’m obsessed. Go Rangers!